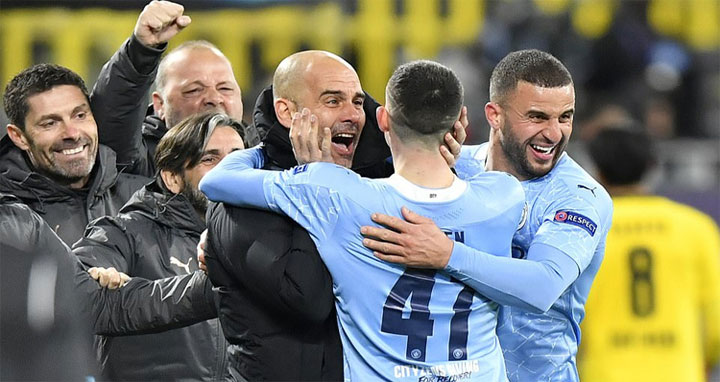 Manchester City has reached the semi-finals of the Champions League for the first time under coach Pep Guardiola. In the return leg of the quarter-finals, the Citizens have cut their ticket to the last four with a 2-1 victory over Borussia Dortmund.

Guardiola’s side went on a tour of Germany with a 2-1 victory in the first leg of the Etihad. In the return leg, Dortmund’s field signal fell behind Iduna Park at the beginning, but City took the victory by turning around. The English giants secured the last four of the Champions League for the second time in their history by leading 4-2 in two legs.

Dortmund scared City at the beginning of the match. In the 15th minute, 16-year-old English star Jude Bellingham led the German club with a great shot from Konakuni. Dortmund went to the break keeping that gap.

However, City turned around in the second half. Dortmund’s Emre Ken sat fouled inside the D-box. Citizens get penalties. Riyad Mahrez equalized in the 55th minute with a successful spot-kick. Phil Foden then snatched Dortmund’s dream of reaching the last four. The English midfielder scored the winning goal for City in the 85th minute through a Bernardo Silver pass.

With this, City reached the last four for the first time under coach Guardiola. Their run was under the Spanish coach, who had previously beaten Barcelona twice in the Champions League, until the quarter-finals.

The city was last seen in the last four of the Champions League in the 2015/16 season. Etihad coach Manuel Pellegrini lost to Real Madrid in the last season and the citizens reached the semis.

On the other hand, Dortmund’s dream of playing in the Champions League next season has faded at this rate. Because they are in fifth place in the current Bundesliga. If they want to play in the Champions League, they have to be in the top four in the domestic league. But Dortmund is 6 points behind the four-a-side Eintracht Frankfurt.

Barcelona wants Manchester City veteran Argentine striker Sergio Aguero in the squad.
10 of the best active free-kick takers in football.
Liverpool has secured a place in the quarter-finals of the Champions League by beating Leipzig.