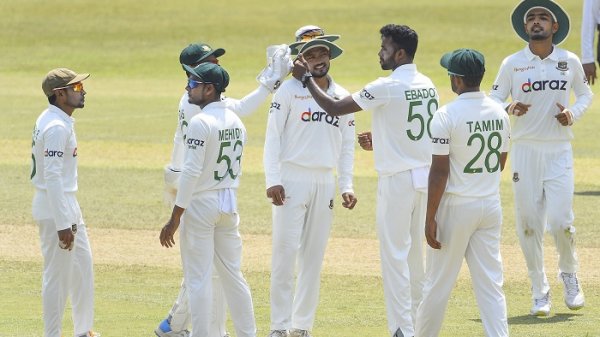 Bangladesh will face Sri Lanka in the first Test of a two-match series. In the meantime, the two teams have entered the field in the last day’s fight. Despite not having any success on the fourth day, the Tigers had a great morning session on the fifth day.

Sri Lanka started the fifth day with 512 runs for the loss of three wickets. Dimuth Karunaratne and Dhananjay de Silva, the two unbeaten batsmen of the previous day, batted for the hosts.

Taskin Ahmed got the first success in the fifth over of the day. He bowled Dhananjay through the inside edge. The all-rounder scored 17 runs before returning to the dressing room.

In his next over, Taskin returned the dangerous Karunaratna. He slowed down the previous ball but he pushed the next one in the same line and length. The Sri Lankan captain caught the difference in speed. He returned for 244 runs.

Shortly after, Ebadat Hossain made a catch to Liton Das and dismissed Pathum Nishanka. After being run out and returning to the dressing room, Niroshan Dickwella could not score more than 31 runs.

Wanindu Hasaranga tried to increase the score alone. Taizul Islam bowled him for 43 runs. Lahiru Kumara was ruled out due to injury and the Lankans will be all out if they get one more wicket.